Please join me for the Southern California premiere of one of the most controversial modern operas, The Death of Klinghoffer by noted composer John Adams.  I will be singing in the chorus in Long Beach Opera’s upcoming performances of this amazing opera on March 16th and March 22nd in Long Beach, CA.

In 1985, Palestinian Terrorists hijacked the cruise ship Achille Lauro and senselessly murdered a Jewish-American passenger. Adams’ landmark opera is a microcosm of human tragedy triggered by ongoing conflict. The passionate score waxes and wanes with the frantic pulses of the captive passengers and the endgame is the long overdue SoCal Premiere of an opera LA Times calls a “rare insight into the most troubling and destructive political and cultural division of our age.

The Death of Klinghoffer explores the roots of a conflict that has shaped our era, demonstrates the common humanity of all those involved in it, condemns violence and shines a light on the everyday heroism of ordinary people … The music in “Klinghoffer” varies from lyrical to edgy, mechanistic to ecstatic. This opera is a work of art, and the story, dialogue and dramatic effects it contains are not intended to be an historical accounting of the events that transpired on the Achille Lauro cruise ship in 1985.

Here are a few photos from our rehearsals thus far:

Building a wall of suitcases for the Night Chorus 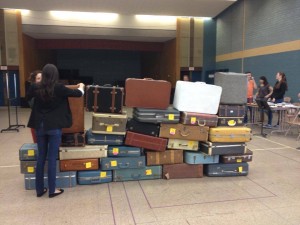 The terrorists hijack the ship and take the passengers hostage! 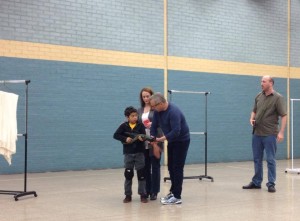